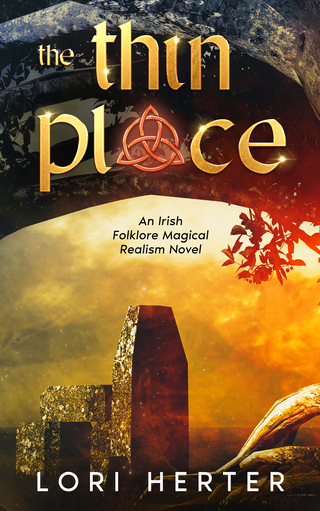 The tiny, fenced graveyard, surrounded by gnarled trees and thick foliage, lay misty and silent in the May morning’s drizzle. The only sounds Glenna Molloy heard were the intricate notes of hidden songbirds. The quiet rush of nearby water reminded her she was on an island in a large lake formed by ice age glaciers.

She opened the creaky metal gate. The ground inside was uneven, with rocks buried beneath lush, six-inch grass. She had the unsettling feeling she was stepping on broken headstones from centuries past. Some, perhaps, of Finn’s ancestors. She checked the standing headstones for his surname, Maguire, but found none. Most of the intact gravestones were far too weathered to read.

Making her way to the center of the graveyard, she searched for the pre-Christian carved stone she’d seen in Finn’s book, Ireland’s Thin Places. Published twenty years ago, the book was filled with his mystical color photos of ancient sites.

Eily O’Grady, Glenna’s B & B landlady, had given her directions to Caldragh Graveyard. She wished Eily had come along, to help her find the monument.
All at once she spotted it in front of her, a dome-shaped rock at least three feet high. The face engraved on it, whose slanted, serene eyes seemed to keep watch, appeared only mildly eroded despite perhaps thousands of years of exposure to the elements. She walked around the stone to see a similar face carved on the other side.

Glenna reached into her raincoat pocket for her well-used digital. She pressed the button to turn it on, but nothing happened. Slapping it against her palm, she coaxed it to push out its lens. If only she could spare the money to buy a new one. A travel writer using a decrepit camera was like a violinist bowing with moth-eaten horsehairs. Though no photo she took could ever come close to the artistic beauty Finn used to create, no matter what camera he used.

She snapped pictures from different angles. Some of the photos came up with odd streaks of light, maybe the sun catching specks of dust in the breeze. Stepping up to the stone for a close-up, she gasped with astonishment. In a deep, broad hollow at the top lay a pile of coins. Thick and yellow-hued, they gleamed in the drizzle like the proverbial pot of gold at the end of the rainbow.

Bending closer, Glenna noted that the coins were a mixture of British Pounds Sterling and Euros. County Fermanagh, Northern Ireland, bordered the Republic of Ireland, and both Pounds and Euros were accepted here. Even by arcane deities, apparently.

Why would people visit this seemingly forgotten place and leave money for the nameless pagan god? Even more mysterious, no one stole the money. The Fountain of Trevi in Rome had been robbed of the coins people tossed into it. But here, at a spot well away from the main road, these coins remained untouched.

An unbidden thought crossed Glenna’s mind: She could sure use some extra cash. Unable to make her mortgage payments in the current bad economy, she’d sold her home in Southern California, managing to break even. She’d also lost a great deal of her nest egg to investments that had gone sour. She’d avoided falling into debt, thank goodness. So far, anyway.

Common sense told her she shouldn’t have made this trip to Ireland. She really couldn’t afford it. But an insistent inner voice had urged her to visit the Emerald Isle, and she’d long made a habit of following what her heart told her to do.

Looking at the pile of coins, she estimated there were enough to buy a nice dinner for two in Belleek or Enniskillen. Inviting Eily out to a restaurant might be a thoughtful way to show appreciation for her landlady’s generosity. Eily had been kind enough to let Glenna strike a deal. Glenna stayed at the B & B rent free in exchange for making beds, vacuuming, dusting, and serving guests the big Irish breakfasts that Eily cooked.

But an even more tempting thought crept into Glenna’s mind: The coins might be combined with what she could spare from her meager, had-to-last-for-six-months budget to buy a new digital. One of the less expensive ones anyway.

She drew her coat’s hood over her head and stood there shivering in the increasing rain, examining her options. Self-reproach stopped her short. God, what am I thinking?

Yes, she was currently homeless, broke, and her writing career was floundering, because in the economic downturn fewer people could afford to go away on vacations or buy travel books. Was she so desperate that she’d steal money left, perhaps, by other desperate people who believed that offering a coin might change their luck?

Glenna sighed and wiped rain off her face. No, she’d never be that hopeless. She inhaled deeply and let it out slowly, connecting with her breath, calming her mind. Her yoga breathing technique had become second nature. Slipping her cold hands into her coat pockets, she discovered a stray American quarter and pulled it out. She wouldn’t need it anytime soon. Maybe the Celtic deity would enjoy a coin from across the sea.

“Good wishes for Finn,” she whispered as she added her quarter to the other coins in the hollow of the monument.

All at once, she experienced the uneasy sensation that someone was watching her. She turned to look around, but saw only the decaying headstones, green grass, thick bushes, and trees, one covered in small white flowers. She glanced down at the carved face on monument again. What she felt must have been the still, slanted gaze of the ancient deity recognizing her gift.

cimarron secrets
The story of vampire Rafael de la Vega continues. Rafael loves a mortal woman, but will his love destroy her?

This is the sequel novella to "Cimarron Spirit" in the EDGE OF DARKNESS vampire anthology.

Edge of Darkness
A woman archaeologist uncovers the resting place of a vampire who had been a Spanish conquistador. Is her life in danger? Or her heart?

The Thin Place
A travel writer flies to Ireland to explore sacred places cherished by her lost love.
Loading…}